The public health authority, known as Title 42, was invoked at the onset of the coronavirus pandemic, despite suspicions among officials that it was politically motivated. It allows authorities to swiftly remove migrants encountered at the US southern border, effectively barring those seeking asylum from doing so and marking a […]

The public health authority, known as Title 42, was invoked at the onset of the coronavirus pandemic, despite suspicions among officials that it was politically motivated. It allows authorities to swiftly remove migrants encountered at the US southern border, effectively barring those seeking asylum from doing so and marking a departure from previous protocol.

“Under the Title 42 order, those non-citizens can be rapidly screened, and then quickly expelled, substantially reducing the risk of transmission,” Justice Department attorney Sharon Swingle told a three-judge panel.

The use of the authority has fielded fierce criticism by immigrant advocates, attorneys and health experts, who argue it has no health basis and puts migrants in harm’s way. The United Nations refugee agency has also pushed back on the authority.

Wednesday’s court proceedings stemmed from a lawsuit filed last January, when the American Civil Liberties Union and others challenged the Trump-era border policy on behalf of migrant families. The ACLU had also challenged subjecting unaccompanied children to the policy, though they are now exempt.

“We are back in court because the Biden administration has chosen to continue this brutal policy against families, despite the absence of any support from public health officials,” said the ACLU’s Lee Gelernt, lead attorney in the litigation.

The judges appeared skeptical at times about the basis of the order, particularly the premise that it guards against transmission in congregate settings, or specifically in the case of the US-Mexico border, border facilities. Judge Sri Srinivasan, for example, noted that unaccompanied minors, who are exempt from the order, are not subject to it and pass through those same facilities.

Judge Robert Wilkins, meanwhile, said he’d “be inclined to be very sympathetic” to the US government, but underscored the unprecedented nature of the order.

“I’d be inclined to be very sympathetic to your position, but we have Supreme Court authority that says that when you know an agency is taking you know, unprecedented, you know, action or for exercising some unprecedented power that we were to look askance at that,” he said.

Plaintiffs in the case had been in negotiations with the government for several months, and as part of the litigation, the ACLU referred some families to be admitted to the US.

Those negotiations fell apart, though, when the Biden administration decided to keep the public health order in place, angering immigrant advocates who argue it should be ditched.

At the time, a senior Homeland Security official, who’s since departed the administration, painted a dire picture in a court filing of what would occur if the public health order were lifted, citing a migrant surge at the US-Mexico border that had overwhelmed facilities.

“These encounter rates have strained DHS operations and caused border facilities to be filled beyond their normal operating capacity, impacting the ability to employ social distancing in these congregate settings. At the same time, DHS is also experiencing significantly increased rates of noncitizens testing positive for COVID19,” the August declaration read, arguing that the risk had increased because of the highly transmissible Delta variant of the coronavirus.

A month later, a federal judge blocked the Biden administration from expelling migrant families with children under the public health order, but an appeals court stayed the ruling.

The administration continues to rely on the authority. And when asked about it, the White House has referred to the US Centers for Disease Control and Prevention, which, according to a spokesperson, deems it necessary given the Delta and Omicron variants.

But Judge Justin Walker contended that despite the evolving state of the pandemic, there are more precautionary measures that can be taken. “This isn’t March 2020. We have widespread available effective vaccines. We also have a whole host of testing that wasn’t as widely available and or treatments as well,” Walker said.

Gelernt leaned into a similar argument, saying that the government has not done enough to equip border facilities to take in migrants instead of expel them.

Swingle argued that the government is trying to get back on track, but can’t rely on vaccines to prevent transmission of Covid-19.

“Vaccines are more available, but vaccinating somebody upon encounter does nothing to reduce the risk that that person may spread Covid in a congregate setting, in the days after a vaccination when the vaccine has not yet become effective,” Swingle said.

Concerns remain among immigration attorneys, advocates and public health experts about the expulsion of migrants to Mexico and other countries.

“Today we heard the same unconvincing arguments from the Biden administration that we’ve been hearing for the last year about this xenophobic and baseless policy, arguments that have already been rejected in federal court. Title 42 unjustly and unnecessarily inflicts harm on families seeking asylum at our border, and we will continue to work tirelessly to ensure that this policy ends once and for all,” said Diana Kearney, senior legal adviser with Oxfam America, in a statement.

In a recently released report, Human Rights First found nearly 9,000 reports of kidnappings and other violent attacks against people who had been expelled to Mexico or blocked from seeking protection in the US.

Who’s who in Eric Adams’ administration

Thu Jan 20 , 2022
Yes, New York City Mayor Eric Adams is thinking about “emotional intelligence” as he fills out his administration, but he’s also thinking about demographic representation. He said for months that he would appoint a woman to lead the New York City Police Department and he did, setting up Keechant Sewell […] 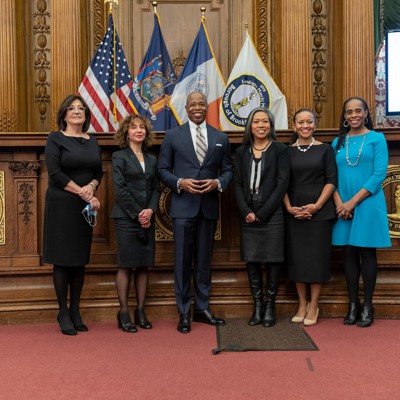