MENASource January 24, 2022 How the Biden administration can assure regional partners in the wake of the Houthi attacks on the UAE By William F. Wechsler The recent attacks on January 18 and 24 by Iran-backed Houthi rebels in Yemen on the United Arab Emirates’ (UAE) capital Abu Dhabi clearly […]

The recent attacks on January 18 and 24 by Iran-backed Houthi rebels in Yemen on the United Arab Emirates’ (UAE) capital Abu Dhabi clearly demonstrate, yet again, Tehran’s unique policy of routinely giving precision weapons to non-state proxies so that they can intentionally target civilians across borders. It’s worth reminding all objective observers in Washington—no other government in the world does this. There are no daily reports of non-state Arab, Baluch, or Kurdish groups armed by the US or another power that continuously threaten to lob missiles and send drones across international borders to kill innocents inside Iran. Nevertheless, such practices are precisely part of Iran’s longstanding approach to projecting power against Israel—a policy it is now replicating against Saudi Arabia and the UAE.

US President Joe Biden is right to reconsider his previous decision to withdraw the US terrorist designation of the Houthis. Such a designation isn’t an easy decision; assessing the likely ramifications of such a move, the Donald Trump administration was internally divided on the question for years. Indeed, it only issued its designation during its final days in office in January 2021—the timing of which was especially questionable and strongly suggested a high degree of cynicism, at the very least.

The factual merits of such a designation aren’t in question—the Houthis clearly qualify. After all, even as the Biden administration revoked the designation about one month after it was issued in February 2021, US Secretary of State Antony Blinken accurately enumerated the Houthi’s long list of offenses, “including taking control of large areas of Yemen by force, attacking US partners in the Gulf, kidnapping and torturing citizens of the United States and many of our allies, diverting humanitarian aid, brutally repressing Yemenis in areas they control, and the deadly attack on December 30, 2020 in Aden against the cabinet of the legitimate government of Yemen.”

The Biden administration revoked the Houthi terrorist designation in conjunction with its launch of a significant US diplomatic effort to reach a ceasefire in Yemen. The objective was to reduce the carnage and ensure vital humanitarian aid could be delivered without interference. From the outset, the Saudi-led air campaign in Yemen has been quite predictably a disaster. However, despite Riyadh’s desire to find an exit strategy, it will undoubtedly continue as long as Houthis attack Saudi Arabia and the UAE. This is why the Biden administration’s early prioritization of a diplomatic solution was so welcome.

Unfortunately, after a year of sincere efforts toward this end, it is plainly evident to impartial actors, including Hans Grundberg, the United Nations Secretary-General’s Special Envoy for Yemen, that the Houthis are the primary obstacle to any such agreement. The absence of a terrorist designation isn’t incentivizing the Houthis to negotiate in good faith. It is worth considering whether the imposition of such a designation will help do so over time, as we found was the case with the FARC in Colombia.

One shouldn’t hand-wave away the concerns of humanitarian organizations about the potential negative implications of a Houthi terrorist designation. Nevertheless, at this point, it may be more productive to consider thoroughly how to mitigate those effects with clear exceptions to the US sanctions regime rather than refraining from the designation itself.

Even more significantly, a decision regarding a potential Houthi terrorist designation must be considered in the context of the most important single geopolitical factor in the region: the widespread perception of American withdrawal. This perception is working against multiple core US interests and, if not reversed, has the potential to set the stage for a regional confrontation much larger than the current catastrophe in Yemen. When Iran attacked Saudi Arabia’s oil installations in 2019, the Trump administration’s feeble response reinforced this perception.

In his first foreign policy speech after the inauguration, President Biden appropriately pledged to “continue to support and help Saudi Arabia defend its sovereignty and its territorial integrity and its people.” After the most recent attacks in the UAE, the region will be watching to see how such pledges are translated into action.

William F. Wechsler is senior director of the Rafik Hariri Center and Middle East Programs at the Atlantic Council.

Image: Remains of ballistic missile that was intercepted in an industrial area are seen, in south of Dhahran, Saudi Arabia, January 24, 2022. Saudi Press Agency/Handout via REUTERS

Fri Feb 4 , 2022
Researchers discovered 192 examples of spines threaded onto reeds in a remote part of Peru. It took place some 500 years ago, when Europeans were opening native tombs to seek gold and silver. The practice may have been a ritual response to graves being pillaged, an expert told Insider.  Loading […] 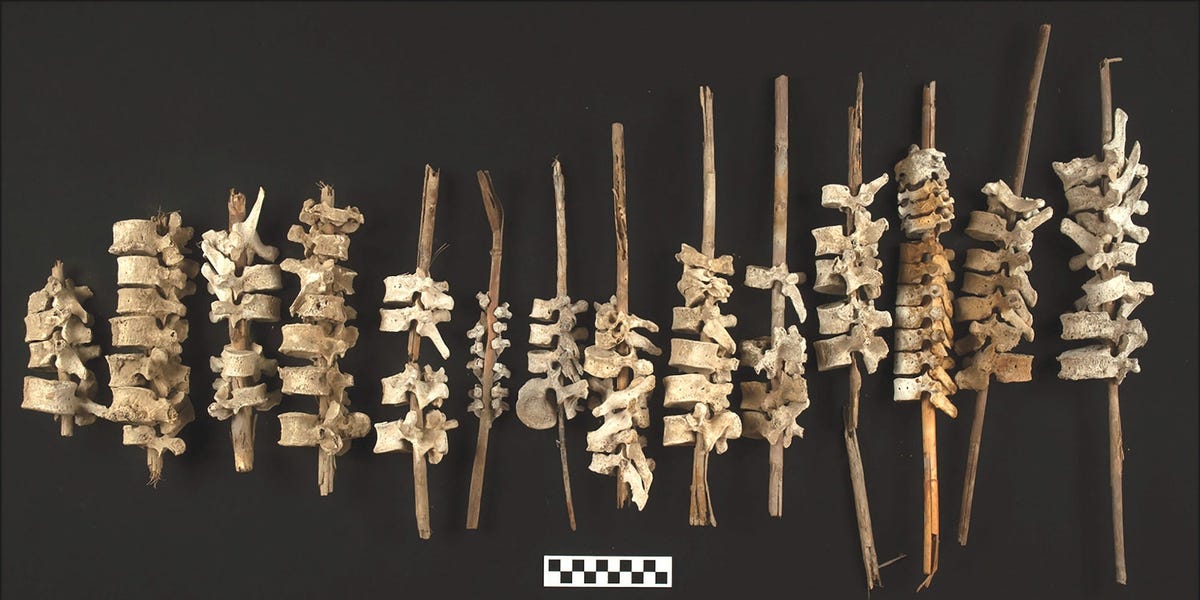